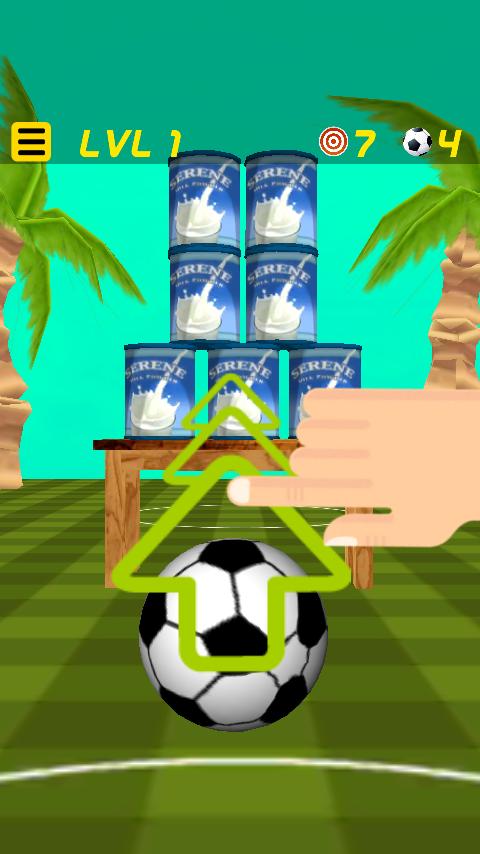 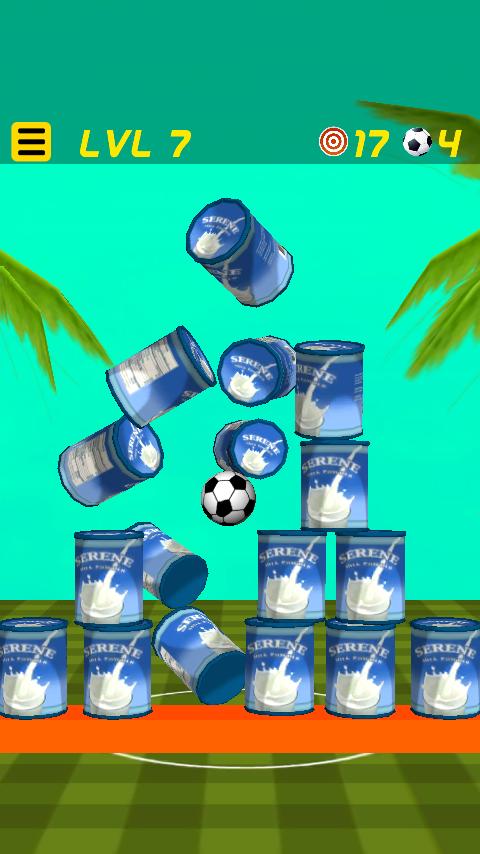 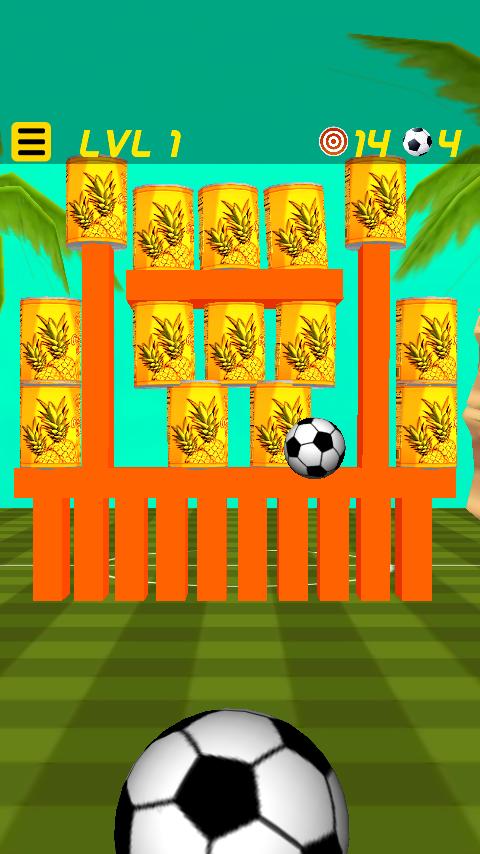 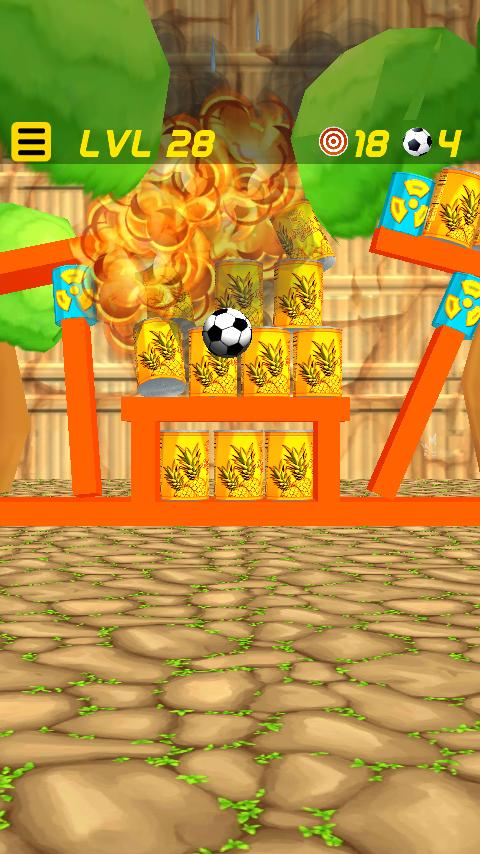 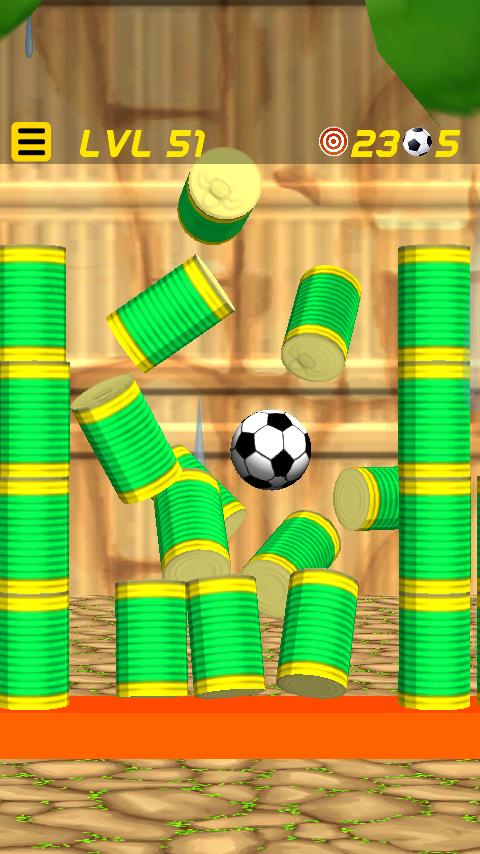 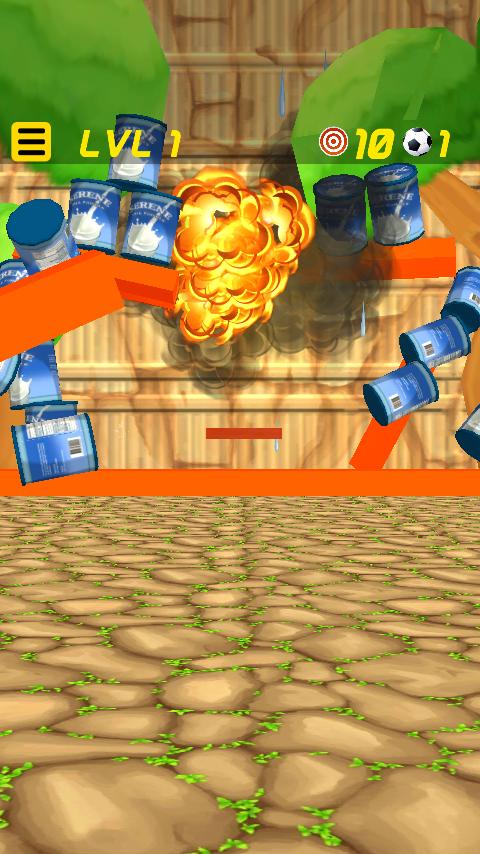 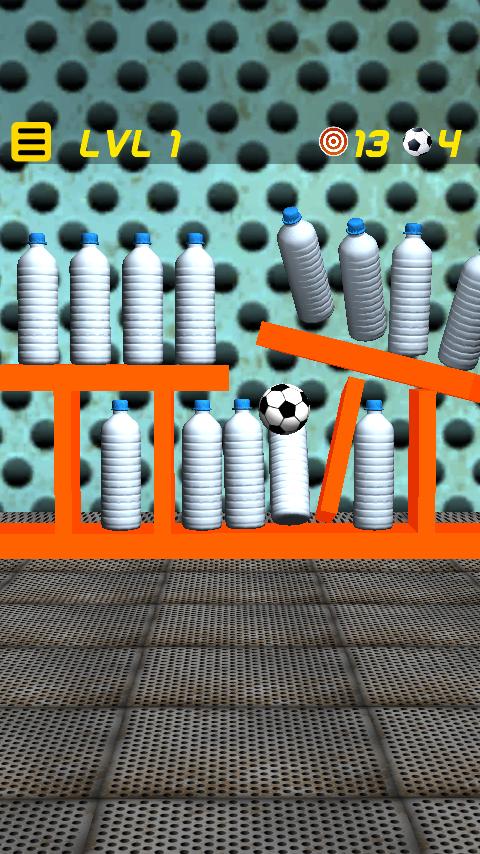 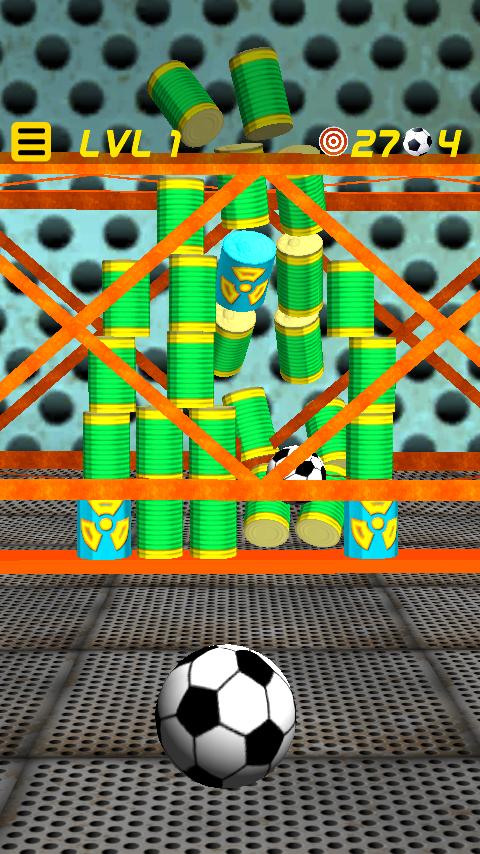 backward
forward
The goal of the game is to use soccer balls knockdown all the targets (cans and bottles) so that they hit the ground. The interface is simple and easy to use, can be played with one-touch and swipe of a finger. Just swipe or flick the screen to aim and throw the soccer ball to the direction of the targets! You have a limited number of soccer/football (thus limited chance) to tumble all the targets.

To win the game and knockdown "all" the targets, but it's not as easy as it sounds. Some targets are harder to hit, so aim carefully or you might miss. And since there's a limited number of balls on each level, then you'll need to make sure to use them effectively to knockdown all the targets. Running out of soccer ball means "game over."

Aim so that the soccer/football hits as many targets (can, barrel, drum) as it can. Knockdown strategically so that the target structure collapses.

Some levels are like puzzles (with the targets stacked or arranged in formation) and you need to carefully chose which target(s) to knockdown to maximize the impact of your throw. Producing chain reactions so that a single target causes other targets to trip and fall is part of the fun. Some levels has special targets (such as exploding cans and "bonus lives" cans that will give extra balls, and animated platform). The exploding cans can be used to your advantage because they can knockdown other objects around them, which usually means you'll have easier job to win the game.

There are over 50 levels to unlock and play (and they're free), with the difficulty increasing and more stuff to knockdown. The levels include multiple environments with varying cans, barrels, drums, and power ups configurations and formations. Try to knockdown as much as possible with the limited number of balls available. Some of the configurations require problem solving to add to the challenge. Sometimes the targets are elevated and stacked on platform such as desk, wood, or blocks - but these can be knocked down too. It's often beneficial to hit the platform instead of the cans to cause other targets to lose balance and fall to the ground, which means less targets to hit to win the level.

New Star Baseball
Five Aces Publishing Ltd.
Step up to the plate as the next big baseball superstar - and experience the rollercoaster life of a professional player in ‘NEW STAR BASEBALL’, from the people who brought you the hit sports games ‘Retro Bowl’ and ’New Star Soccer’.

Plucked straight out of high-school by top baseball scouts who believe you could be a rare two-way player, it's up to you to prove them right as you face the hard reality of competitive baseball in the big leagues.

Will you seize your chance and build on your one-in-a-million talents to make it to the hall of fame? Or will you plunge headlong into the high-rolling temptations of glitzy casinos and all the luxuries that money can buy?

▼Get wrestler cards on your phone with NJPW Collection!
《Gorgeous cards just keep coming out one after another》
Nothing quite like the feeling of seeing your favourite wrestlers debut in card form!

BMX FE3D 2 - Freestyle Extreme 3D
EnJen Games
Grab your BMX and get ready to shred! There are so many things to do in this free bmx game!

- Ride your bike and do tons of different tricks!
- Create your own skate parks to ride in!
- Customize your character and your bike!
- Earn skill points to level up your character!
3.7