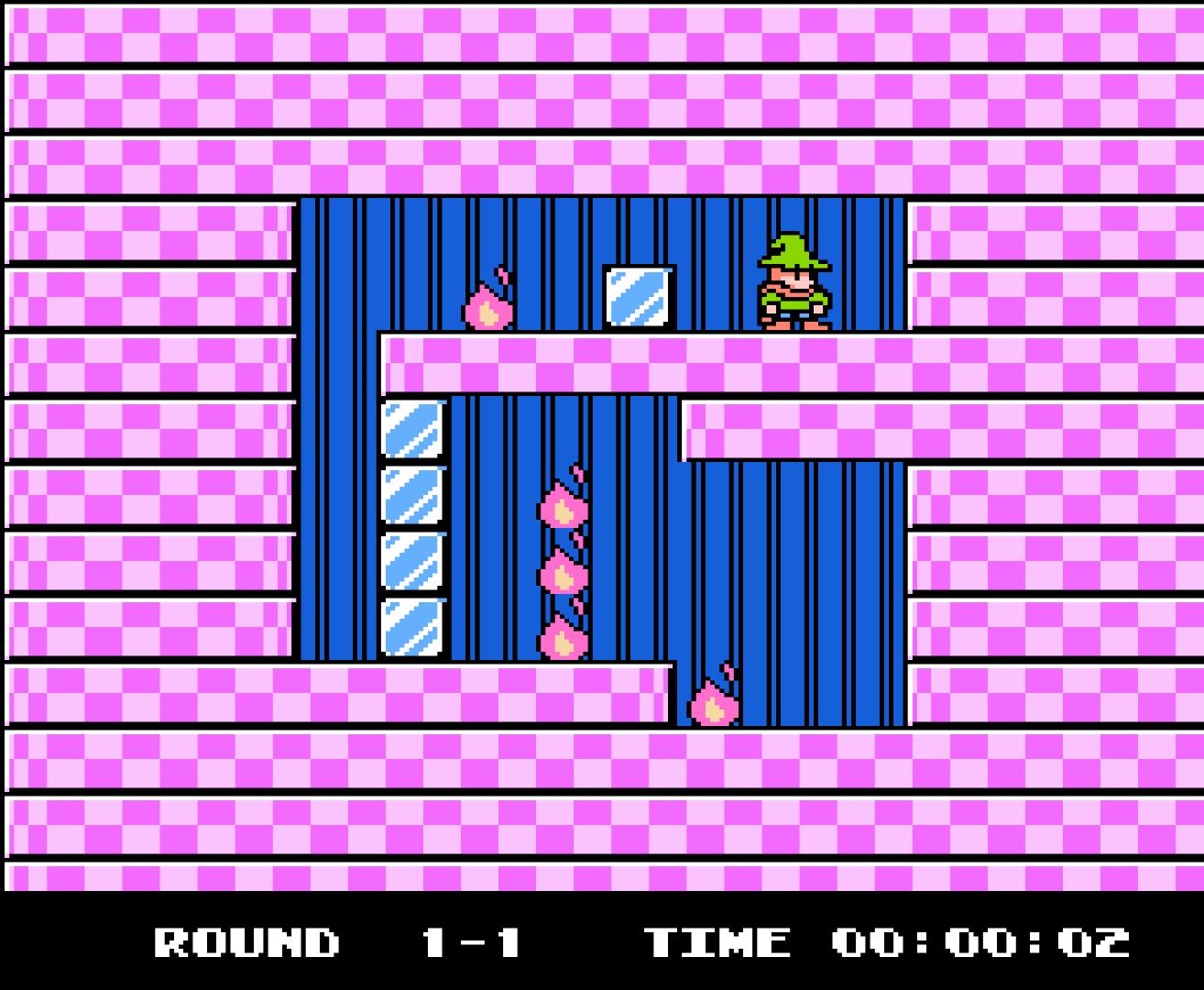 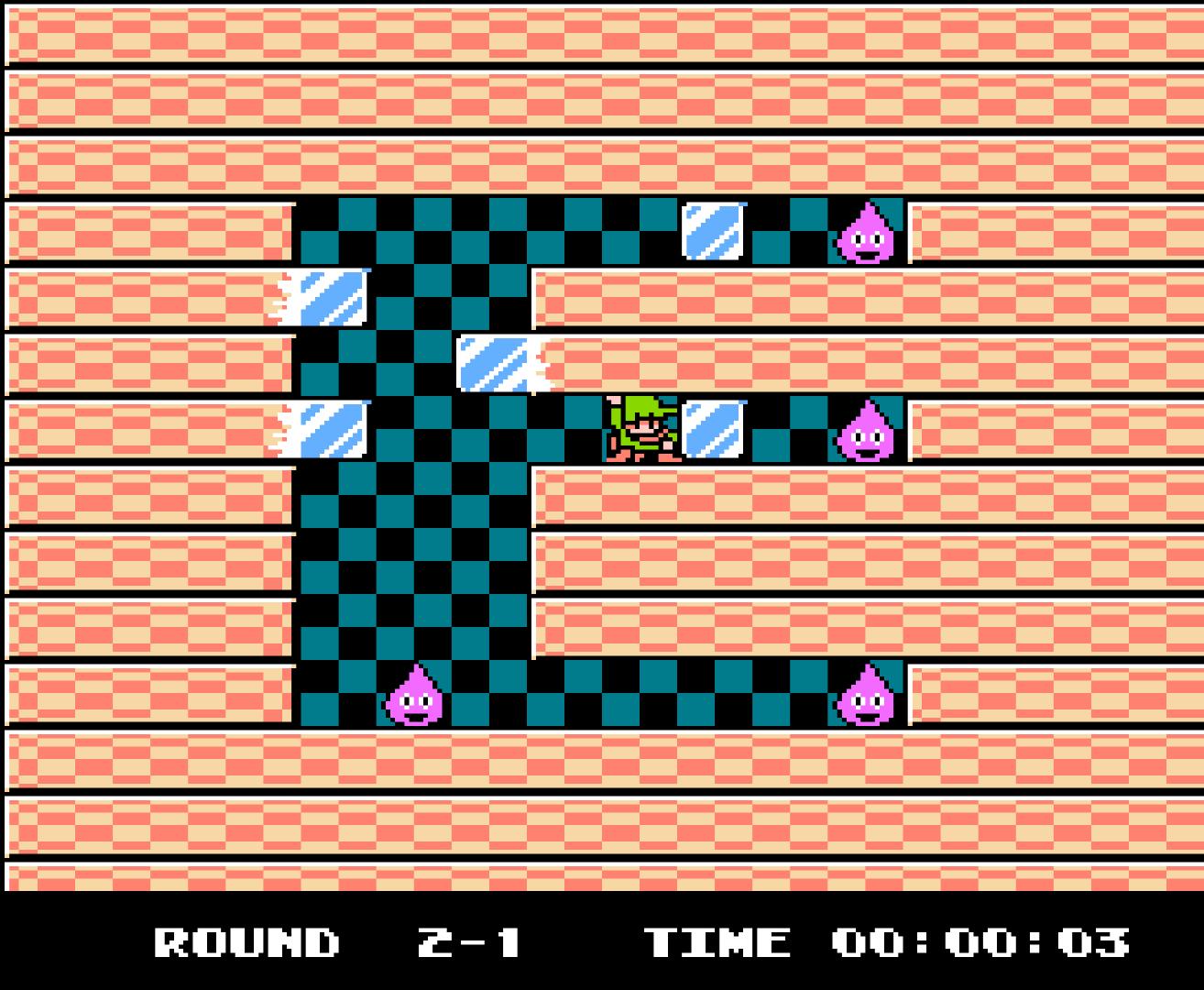 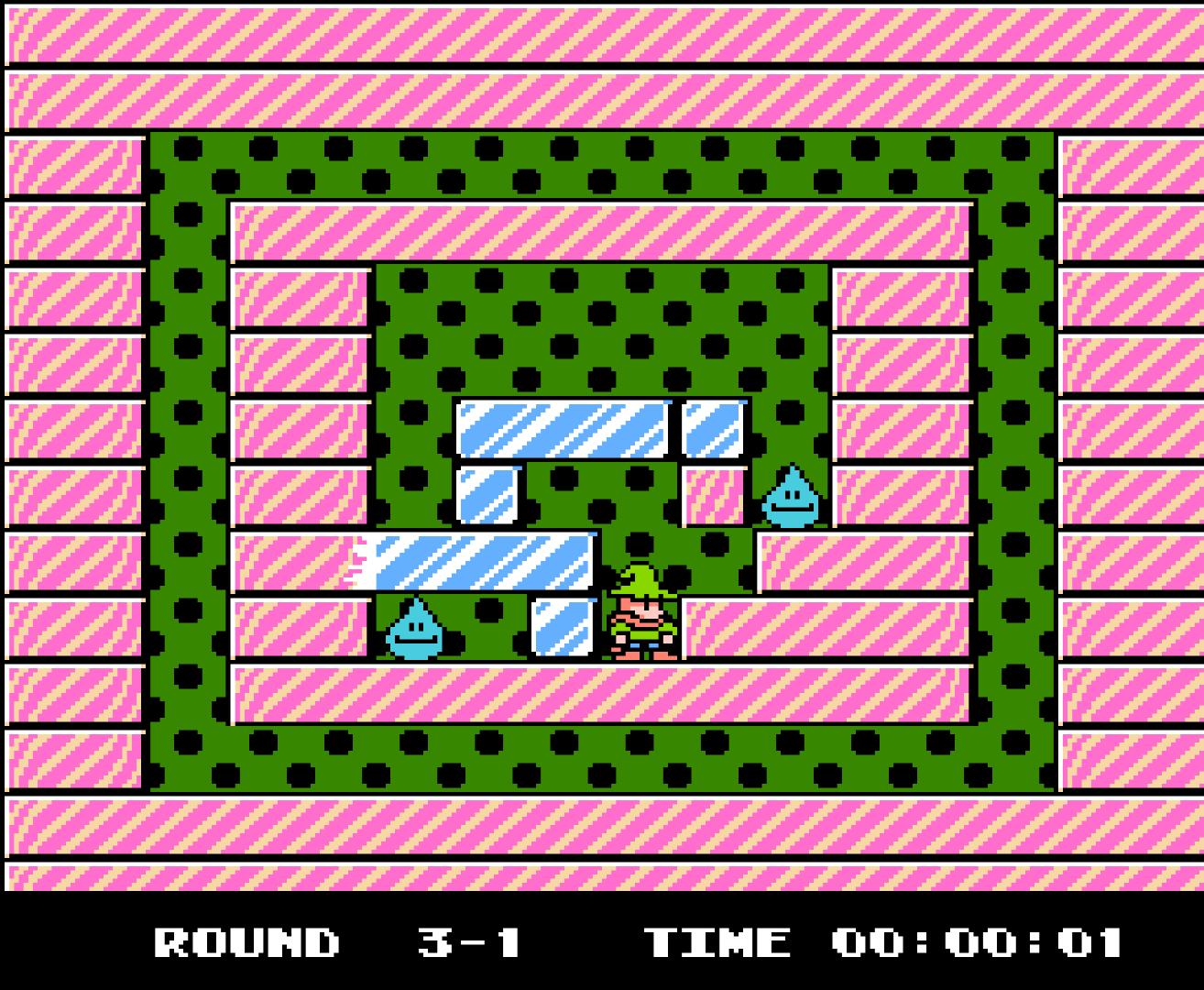 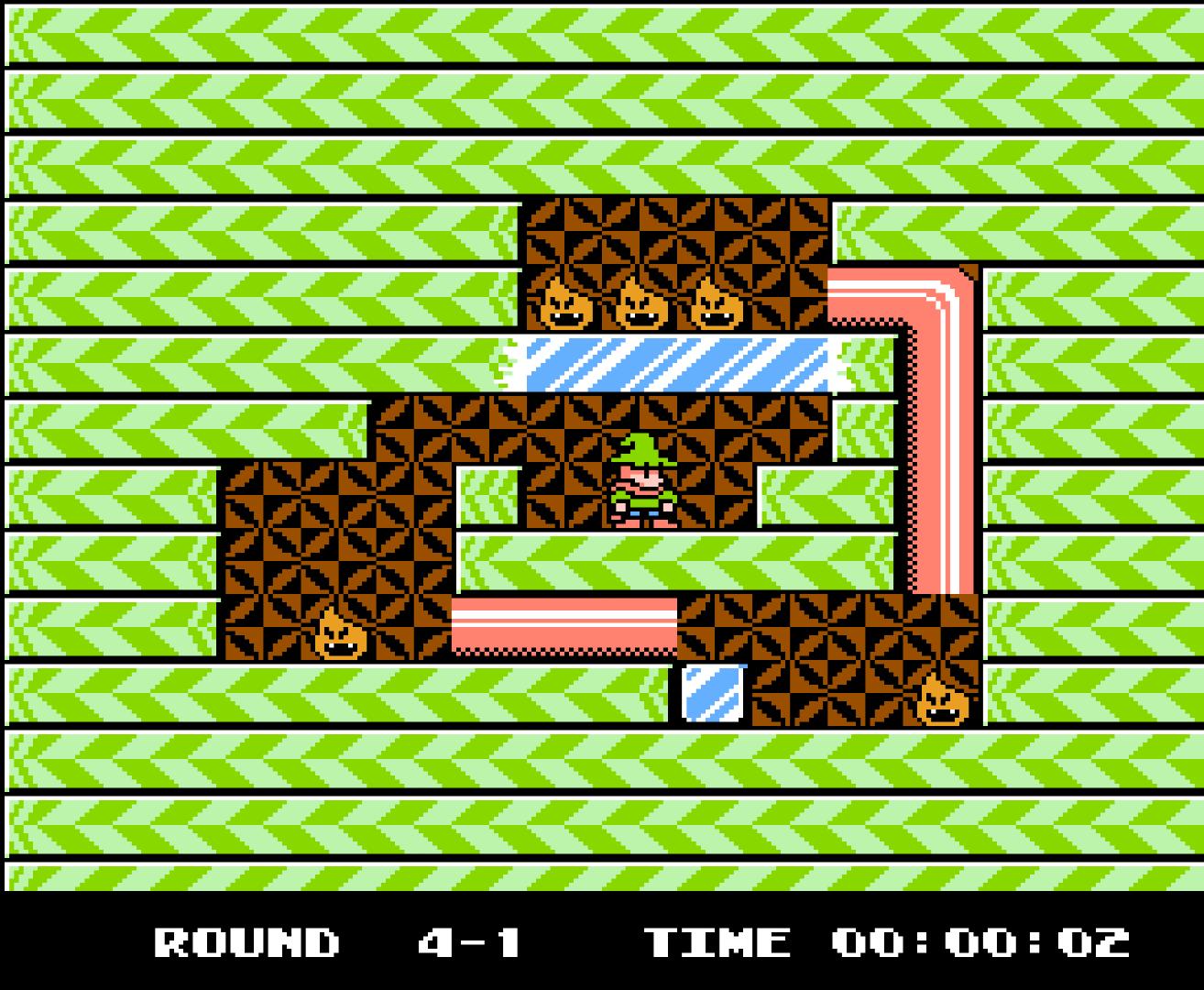 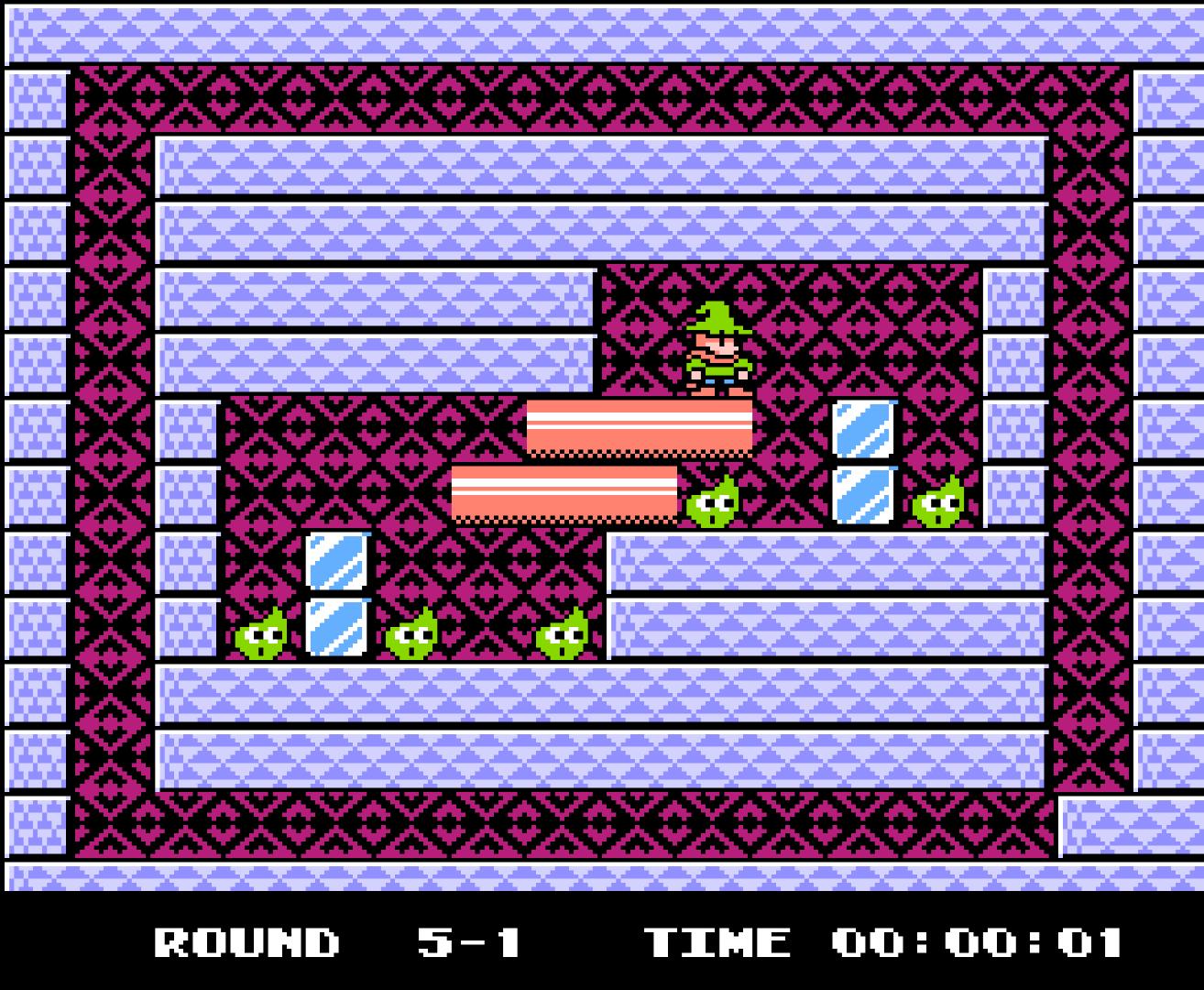 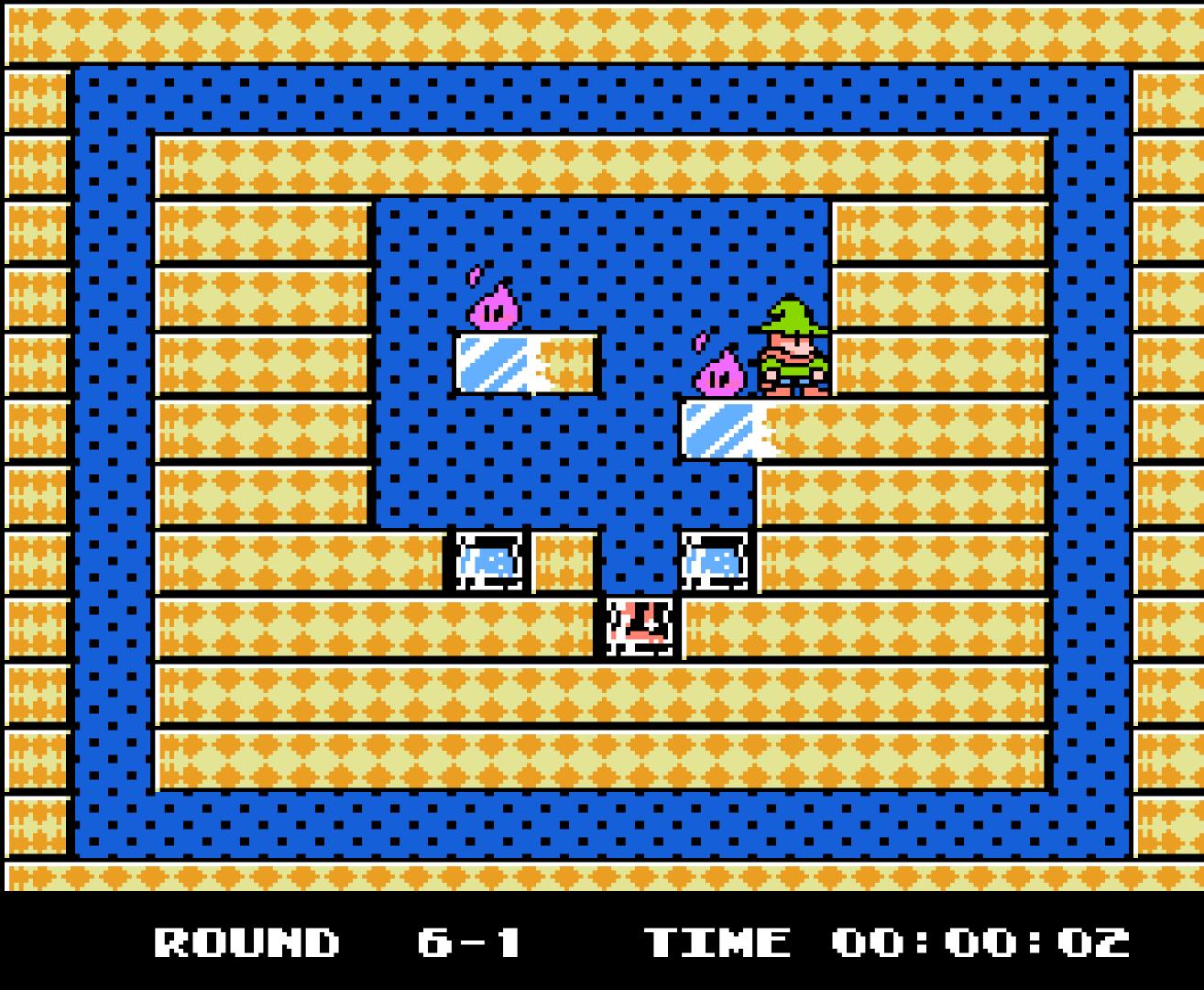 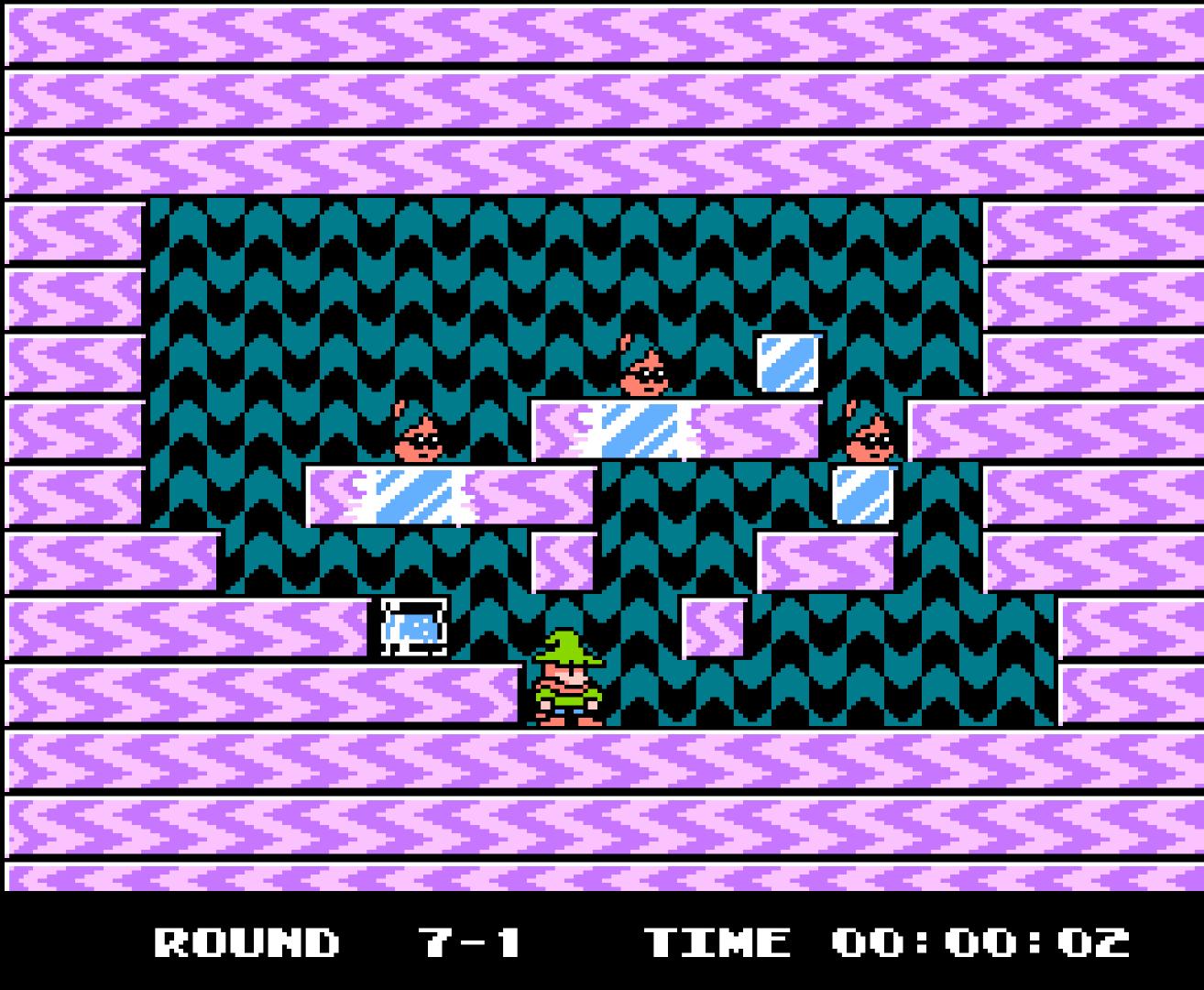 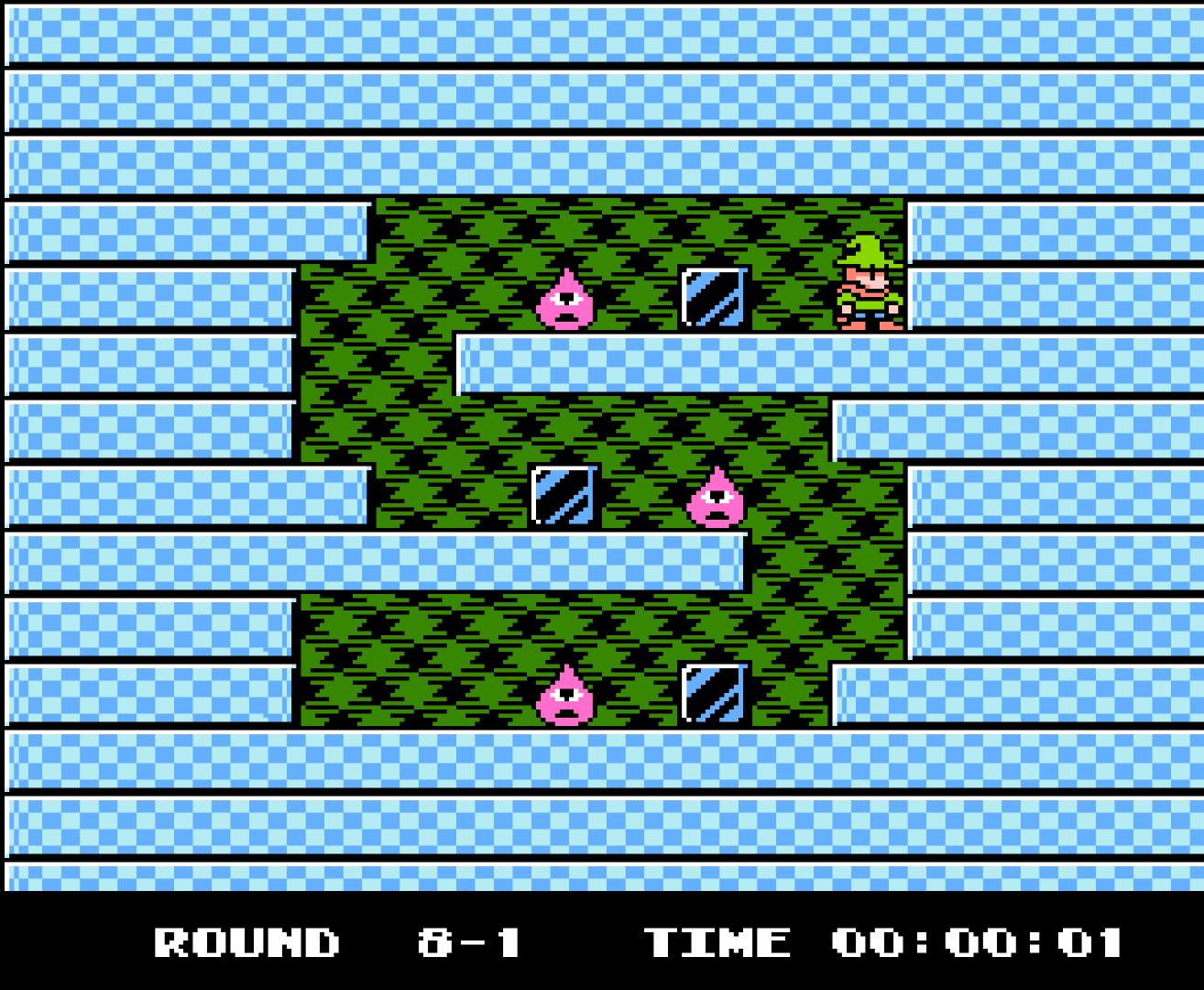 A long time ago, there was an ice island far to the north. It was called
Coolmint Island, a peaceful island inhabited by the winter fairies. But, one
day....An evil wizard named Druidle sent Flame Monsters to the island. "If
something isn't done, Coolmint Island will melt away!" In response to this
crisis the Queen of the winter fairies called upon a wizard. She chose...a
novice wizard named Dana. "Dana, I'll give you Ice Magic to extinguish the
evil Flames." "You have been chosen for your wisdom and courage." "We trust
you, Dana."

The game will assume you know some simple rules. Don't worry if you don't
since the game will gradually introduce new concepts as you complete more
levels. I've summarized all the rules you'll need to know to finish the game
below.

[Basic rules]
A. Objectives
1. Remove all the flames.
2. Defeat any enemies on screen.
3. No time limit except on lava stages. Time is for keeping
personal records and has no effect on gameplay.

B. Using Ice
1. Ice is created diagonally below you in the direction that you are
facing.
2. Ice created next to another object such as a jar, stone, ice, or
wall will "stick" to it and become "secure". Similarly, ice with
support from below is also "secure".
3. Ice may be pushed or dropped if the ice is not secured.
4. Ice may not be placed directly above a burning jar although it
may be placed one level higher up.

A. Physics
1. Ice is a "smooth" surface and will slide across the floor until
stopped by another object or until they drop down through an
opening.
2. A stone is a "rough" surface and will move only 1 space when
pushed. Stones pushed on top of ice won't stop until a rough
surface is reached.
3. Secure ice or Dana can support infinite weight from above.
4. Ice not attached to walls or other secure objects or are
not supported from below will drop down until solid ground is
reached.
5. Removing certain ice blocks can cause chain reactions.
6. Once a jar is ignited, it can never be cooled down.
7. Ice directly above a flame will not melt.
8. You may only push blocks with nothing adjacent to them. 2 blocks
are needed to form "secure" objects.
9. Pipes can still be entered if you are one level lower than the
pipe itself.

B. Strategy
1. Ice can be used to form steps to reach higher ledges.
2. Ice "bridges" can be formed to reach other areas.
3. Many levels require you to set up blocks for later use.
4. Not all the blocks or objects provided need to be used.
5. Stacking blocks is a useful tactic.
6. Play it safe by creating blocks before you destroy them.

Here are the obstacles you will encounter in the game.

Blocks Just your regular run of the mill walls. Nothing special.
Druidle Your arch-enemy of the game.
Flames Remove them with the aid of your wand.
Ice Come in many lengths.
Jars Come in either hot or cold form.
Monsters Come in many varieties. Some fly horizontally. Some fly
vertically. Others carry umbrellas.
Pipes Come in different shapes and lengths.
Stones Are both indestructible and heat-resistant.

Edit mode is an extra part of the game in which you can create your own
levels for play. The rules are the same as in the standard game. You can
create a level with the items.

Merge Mansion - The Mansion Full of Mysteries
Metacore Games Oy
Maddie’s grandmother has something to tell. This mansion is full of stories unheard of! Help Maddie discover what her grandma has to reveal about the family's adventurous past.

Wipe off the dust and find new items, merge them into useful tools and earn surprising treasures. You never know what awaits behind the mansion's next corner.

Let the mystery adventure begin! Run a full home makeover, go ahead and decorate your house just the way you always wanted. Unlock new areas within and around the Mansion, unveiling decade old family secrets on the way. With an abundant combination of items to discover and hundreds of engaging puzzles to solve, the Mansion makes sure it always has new secrets waiting for you.
4.8101

Merge Villa
4Enjoy Game
Alice really needs your help in renovating her grandparent's home and bringing comfort back to her family's mansion. The tsunami destroyed everything, but with your help the building for sure will be restored. Even better, than it was before! Open the gate and let this unforgettable adventure begin!

Merge items into useful tools to renovate and decorate rooms of the mansion, that were destroyed. Make repairs, design a new house with luxurious exterior and interior pieces of furniture. Create an absolutely unique home with your designer’s vision, style and creativity.

Unlock new rooms and give them a total makeover, so no one can say that there was a tsunami. Reveal all the secrets that are hidden in every part of the house. With all the puzzles that are waiting for you there you would never be bored!
4.8101